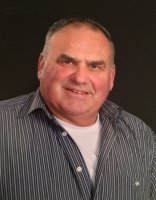 Eldon Duane Heutink went to be with his Lord and Savior surrounded by his loving family, Tuesday, January 7th, 2014. Eldon was born on July 16th, 1946 in Bellingham, Washington to the late John and Dena Heutink. He is survived by his loving wife, Pam of 31 years; his children and grandchildren Jodie, (Karl), Jayden, and Luke Wight, Kylie, (fiance Kevin Elenbaas), Taryn, Taylor, and Lauren Spoelstra, Jason, (Makenzie), Maelyn, and Brinley Heutink, Stacie, (Jason), Hayley, and Tanner Turrell; and his mother in law Gladys Van Diest.

In addition to his immediate family he will be missed by his siblings Arlene (Gerrit) Byeman, John (Bonnie) Heutink, Delbert (Karen) Heutink, and Linda (Rich) Bosman; his wifes family, Sharon (Duane) Wagter, Rich (Markie) VanDiest, Eileen (Cornie) Vreugdenhil, and Janelle (Stu) MacDonald; and numerous aunts, uncles, cousins, nieces, and nephews. He also had many close friends that will miss him dearly.
Eldon was preceded in death by his son in law Nick Spoelstra; parents John and Dena Heutink; and father in law Gerrit VanDiest.

Eldon married the love of his life, Pam VanDiest on November 6th, 1982. He always joked that he decided to marry Pam on her Birthday, so he could always remember both their anniversary and her birthday. They resided on the family farm in Sumas, Washington, and there they raised their four children together. Eldons passion for farming started in 1970 and continued for 37 years before retiring in 2006. After retirement Eldon and Pam moved to Lynden where they felt blessed to be surrounded by many close neighbors and friends and there his love of farming continued, he was grateful for any excuse to use his John Deere tractor or riding lawn mower. Eldon enjoyed tending to a large garden, he had the best sweet corn on the block, taking pride in making sure both family and neighbors were well supplied. If you ever needed to find Eldon you never needed to look any further than his shop, it was always filled with love, laughter and great conversation.

He enjoyed traveling with his wife and family, they shared many camping trips together and also enjoyed being on vacation with their friends. On these trips, there were frequent stops at museums, dams and other monuments. He always enjoyed history, and passed that down to his children. Hobbies he enjoyed outside of farming included snowmobiling, hunting, gardening, playing pool, having a drink with his family and friends and a good barbeque. His true love was his family; he enjoyed having his wife, children and grandchildren by his side. They will all dearly miss his loving soul and generous heart. Eldon was a member of Sonlight Community CRC, where he always enjoyed Sunday conversations with many people; his outgoing personality will be greatly missed.

Eldon graduated from Nooksack Valley High School in 1964. In the fall of 1965 he attended Bellingham Technical School. Eldon moved to Seattle and worked as a mechanic for Kenworth Trucks. Following that he worked at Continental Can as a machinist for 3 years. In 1968 Eldon purchased 45 acres of farm ground in Sumas, which was the beginning of his true calling.

Memorials in Eldons honor may be made to Lynden Christian Schools, 417 Lyncs Drive, Lynden, WA 98264.