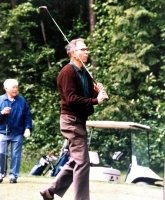 Doug passed away in Bellingham, Washington on February 24, 2013.
Doug was born in Bellingham on June 5, 1926. He grew up in Bellingham and in Burnett County, Wisconsin. He graduated from Bellingham High School in 1944 and attended Washington State College. In 1947 he went to work on Grand Coulee Dam and then went to Seattle City Light to work on Ross Dam. His career with City Light lasted for twenty years, interrupted by service in the Army in 1951-1952, and included work on Ross, Gorge, and Boundary Dams. He continued his career with Harza Engineering Corp. and worked on hydroelectric projects in Iceland, Virginia, and Honduras. Doug also served from 1970-1973 and 1984-1988 as Campus Planning Coordinator for WWSC/WWU. In retirement Doug enjoyed golf and tennis and managed the mobile home park he built at Agate Bay.
Doug tirelessly worked multiple jobs most of his life days as a civil engineer and evenings/weekends building and managing his mobile home parks. He was a volunteer fireman with the Agate Bay Fire Department for many years and served as fire chief from 1984 to 1989. Doug was an avid sportsman who had a deep love of hiking in the North Cascades and played competitive tennis and golf. He was also an ardent sports fan who supported all Washington sports teams. He was especially fond of the WSU Cougars, the Mariners, and the Seahawks. Doug was a compassionate man who believed in the good in all people picking up hitchhikers in the middle of nowhere, donating generously to local charities, and providing job opportunities for acquaintances who were down on their luck. He was a voracious reader, a fearless adventurer, and a loving and supportive husband and father.
Doug is survived by Sandy, his wife of 54 years; son Mike Albee (Xuehong) of Redmond; daughters Teri Olsen (Terry) of Sammamish and Lori Albee (Ross Holly) of Salinas, California; five grandchildren; and three great-grandchildren.
A memorial service will be held Saturday, March 2nd at 2 PM at Moles Farewell Tributes- Bellingham. Donations in Dougs memory may be sent to the Bellingham Food Bank or to the Opportunity Council.
Please share memories at www.farewelltributes.com
Moles Farewell Tributes-Bellingham

Donations in Dougs memory may be sent to the Bellingham Food Bank or to the Opportunity Council.