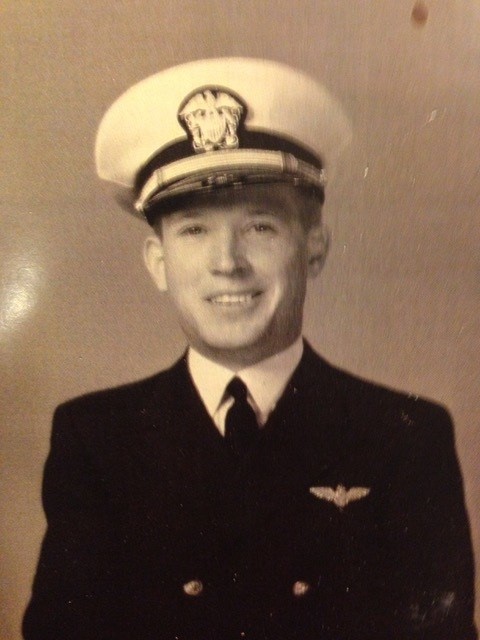 Douglas Craig was born in Abernathy, Texas to Cecil and Lillian Craig. He grew up in the midst of the great depression and although his family experienced poverty and loss, they always shared an abundance of love. Douglas first saw an airplane fly at a county fair when he was a boy and from that moment on, he knew that he wanted to be a pilot. He attended two years of college on a basketball scholarship at Wayland Baptist University in Plainview but when America joined WWII, he quickly enlisted in the Navy as a fighter pilot. He served in the Pacific Theater of operations flying F6F Hellcats as part of VF-82 off of the USS Bennington (CV-20). He was awarded 7 air medals, including the distinguished flying cross, the Asiatic-Pacific Campaign Medal with 3 Battle Stars for Okinawa, and Japan, the Good Conduct Medal and the American Defense Medal. He helped to save the world.

Shortly after the war ended, he ducked into a cafe for a cup of coffee and met a plucky young waitress named Joy. They were married and their love story lasted for over 75 years. Doug worked as a pilot and they raised their three children in Richardson, Texas. In the 1980s, the whole family moved to the Bellingham area Eventually, they had three grandchildren and spent much of their time doting on them. Douglas had a fine spirit of adventure and he and Joy traveled all over the United States to attend Doug’s squadron reunions. Several times a summer, he, Joy, all three of their children and all three of their grandchildren would camp at the North Cascades National Park. The whole family remembers these times as among the very happiest. Douglas had a gentle but hilarious sense of humor and often made complete strangers laugh.

Douglas stayed incredibly active and enjoyed attending a health club well into his nineties. He had something of a fan club there: regulars who were inspired by his dedication and health and who loved talking with him. He held a valid drivers license his entire adult life and he and Joy got out of the house to run errands most every day. He enjoyed being outdoors, working on his house, sports and travel. Most of all, he was a man who was completely dedicated to his family. In 2015, Douglas became a great-grandfather and yet another generation benefited from his love.  Douglas died peacefully at home surrounded by loved ones.

Douglas is predeceased in death by his father Cecil, mother Lillian, brother JT, sister Patsy, brother Gene and beloved wife Joy. He is survived by daughter Pam Craig of Bellingham, son Douglas “Randy” Craig of Bellingham, son Richard “Kent” and daughter-in-law Joanie Craig of Stanwood, Granddaughter Rebekah Craig of Samish Island, Grandson Nathan Craig of Stanwood, Grandson Sam Craig of Fir Island and great-granddaughters Gracie and Willow Young-Craig of Samish Island. 101 is a long time to live on this earth but we were never going to be ready to say goodbye. Forever we love you. Forever we are grateful. Forever you are our hero.