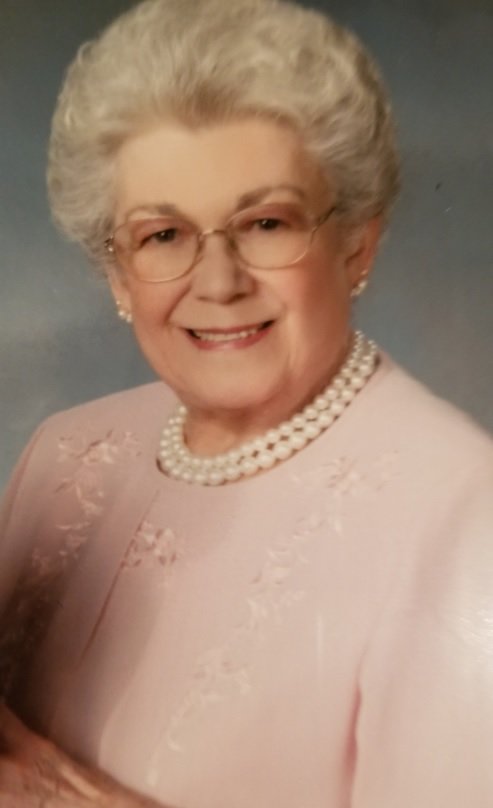 In the evening of December 11, 2018 Doris McGrew passed away with members of her loving family near. Her husband of 63 years, Dan McGrew preceded her in death September 29, 2015.

She met Dan in December 1951 on a blind date set up by his sister, Peggy. The two would be married soon thereafter in the whirlwind of whirlwinds. Their marriage took place at four A.M. in a jail house in Mesa, Arizona but only after a somewhat annoyed Justice of the Peace was roused out of bed to officiate the wedding; the Justice was reported to be just half-awake during the ceremony but he managed to get their names right. With the marriage to Doris, Dan had an instant family as Doris was already mother to two young children, Lucia Baca and Douglas Baca. The family grew when, a little more than a year after Dan and Doris were married, Dennis V. McGrew was born. Dan P. McGrew arriving a couple years after that.

Since Dan was a Merchant Marine engineer, he would take his family up and down the west coast as his job required. Years were spent near various home ports in California but between 1959 and 1974 the family resided in Anacortes, Washington before returning to California. Doris would drive to pickup Dan with her children when his ship came into port driving through the refinery out to the dock, occasionally getting lost on the way until a security guard would redirect her. Doris was a big city girl at heart and the move to Anacortes in 1959 was somewhat traumatic. She stopped at a small motel outside of Anacortes and admired the skyscrapers all lit up. In the morning she discovered that they were the refinery towers and that Anacortes had a population of 4500, she cried. When the last of her children left the house in 1974, she quickly moved to Long Beach, CA.

Upon retirement, Dan and Doris would reside for a time in Sun City, CA before moving to Bellingham, WA in 1984 to be near their grandchildren. Living just a couple blocks away from his grandchildren, Dan and Doris were able to take the children of Dennis (Justin, Marlys, and Nathan) fishing. These fishing expeditions often began at the unfathomable hour of four A.M., the same hour the Justice of the Peace was roused in Mesa, AZ to officiate over his wedding to Doris. It is suspected that Dan McGrew had an affinity for the four o’clock hour, be it A.M. or P.M., because to Dan and Doris four P.M. was popularly known as “martini time!” Doris continued that tradition after Dan passed in the honor of his memory.

Doris had a loving heart and always treated those around her with love and respect. She always had a smile for her children and adored her 5 grandchildren and 8 great-grandchildren.