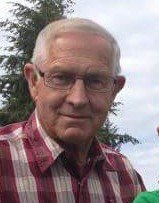 Donald James McKay, life-long Ferndale resident, died in a tragic accident in Blaine on July 4, 2016.
Don was born on September 5, 1941 to Donald E. and Evelyn B. (Winslow) McKay. Don was expected but his identical twin brother Ronald G. was a surprise. Don, Ron and sister Kathy grew up on the family farm on Paradise Road, where the McKay family continued to farm for two more generations. The McKay Farm was iconic in Ferndale, known and visited by many over the years.
Don was a 1959 graduate of Ferndale High School, and was a proud Coug, graduating with a B.S. in Agriculture and Animal Sciences from Washington State University in 1964. He was also very proud to be a Coug Dad. After college, he served in the Army Reserves. He married his wife of 47 years Charleen (Williams) on June 15, 1969 and the couple lived on the farm where they raised their three children Keith (1972-1992), Karen and Bruce.
After “retiring” from dairy farming (those who knew Don knew he’d never really retire), Don briefly worked for Bellair Charters and Airporter, where he enjoyed seeing old and making new friends while driving shuttle bus to SeaTac Airport. He then started his second career with American Canadian Fisheries. He loved his job and colleagues, and he enjoyed learning a whole new industry.
Don’s loves in life were his family, his church, his tractors, and his cat Tippy. Don was a life-long, active member of the United Church of Ferndale. He was a big supporter of the Ferndale School District and Ferndale FFA, and was a familiar face at Golden Eagle basketball and football games. He also loved NASCAR and the Seahawks, and when his daughter married a high school coach, he became a North Mason Bulldogs fan, attending many Bulldog football games and track meets.
Don greatly enjoyed spending time with fellow members of the Puget Sound Antique Tractor & Machinery Club and the Cascade Two-Cylinder Club and driving his four antique John Deere tractors (two of which were his father’s) in all the local parades. Twice he traveled to the Midwest to attend the “Gathering of the Green” John Deere convention with friends from the tractor clubs. Grandad also found great joy in taking his grandkids on tractor rides and was proud that they all knew how to drive at a very young age–just like his kids.
Don was an active participant in the local conservative political community and had tremendous civic pride. He always gave 100 percent to whatever he was doing. He was a hard-working man with a huge heart who was a friend to everyone he met – treating all people with kindness and respect regardless of who they were. He was genuinely interested in getting to know people, and had an amazing ability to remember stories and details – even after many years. Don had the gift of empathy, and he always made time to visit peopleand continue to visit people who were ill or who were coping with loss or tragedy. Don was the first to offer his help, and never wanted any thanks or recognition for it.
Last spring when Charleen suffered a ruptured brain aneurysm, Don was lovingly by her side during her difficult, lengthy recovery. They were both looking forward to rescheduling their Alaska cruise that was postponed due to her illness. For the past 10 years, Don and Charleen have lived next door to their son Bruce and his family, and he loved being so close and getting to be a part of their daily lives. Don and Bruce shared a very special relationship, much like Don had with his own father.
Don is survived by his loving wife Charleen, his daughter Karen (Jeff) Bevers, son Bruce (Shawna) McKay, grandchildren Amy and Carter McKay, and Evelyn and Keith Bevers; brother Ron (Penny) McKay, sister Kathy (Dave) Morgan; nephews Greg (Jennifer) McKay, Brian (Judy) McKay, Glen (Gina) McKay; nieces Barbara (Mark) Carlson, Tami (Steve) Richards, Beki Morgan & fiancé Greg Bernier; honorary daughter Gretchen Unick House; chosen family The Brillowsky family & The Rightmire/Harting families; numerous other great nieces and nephews, family members and friends. Don was also a father figure and a brother to many. He was preceded in death by his son Keith and his parents Donald and Evelyn, and his father-in-law Art Williams.
A memorial service will be held on Sunday, July 10, at 3:00 PM at the United Church of Ferndale, 2034 Washington St, Ferndale.
Memorials can be made to the United Church of Ferndale, PO Box 186, Ferndale WA 98248 or Ferndale High School FFA, PO Box 428, Ferndale, WA 98248. The McKay family greatly appreciates the love and support received during this difficult time.