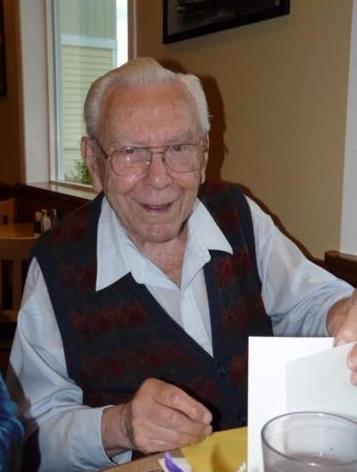 Don grew up in Everson, graduated from Mt. Baker High School, then enlisted in the Coast Guard during WWII. He served from 1942-1946 as a yeoman first class; being stationed in Hawaii, Guam, and Seattle. When his tour of duty was up, he met and married his wife of nearly 50 years, Collene.

He taught hundreds of piano students that ‘Every Good Boy Does Fine’ throughout nearly 60 years of teaching lessons in and around Bellingham. Don’s passions included china painting, sailing, piano playing, whipping up culinary concoctions, and playing Bridge.

Food was a very large part of Don’s life. The preparation of it was only slightly less important than the consumption of it. Many still talk of his baked beans, his incredible potato salad, and let’s not forget the pies and jelly rolls. In his later years, he dearly missed meal making. While living at Rosewood Villa, he tried- more than once – to talk them into allowing him to use their kitchen. Cooking brought him great joy and allowed him to express his love.

He was a gentle soul, as well as a gentleman- he always prided himself on looking dapper. Taking the time to watch the world around him, Don was patient in a way that was unusual. He always made fast friends. Throughout his life he would offer assistance to strangers, and add yet one more friend… one that was eternally grateful for his kindness.

Progressive, but oddly a-political, he was a thoughtful conversationalist and was deferential and polite to strangers and friends alike. To the very end, he remained curious about the world around him, and interested in his family especially.

A memorial service will be held Friday, July 26th, at 2:00, at the Everson Presbyterian Church, 204 N. Washington St., immediately followed by a pie social.