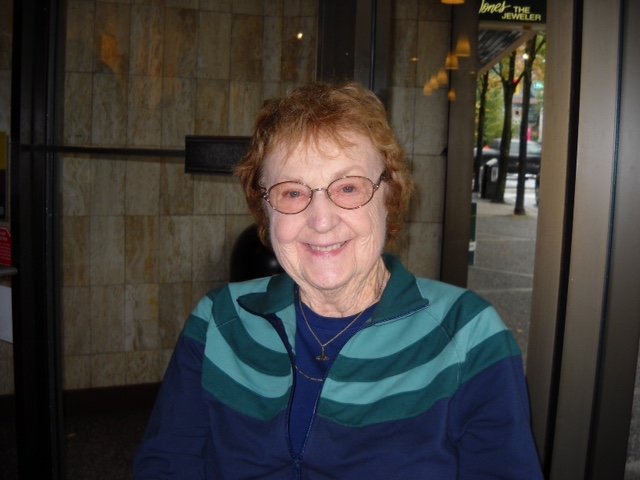 Dixie Thompson died peacefully on Wednesday, July 8, 2015 at age 92. She died as she had lived, surrounded by beloved and faithful friends. Dixie lived her long life with a nearly boundless sense of adventure and fun, letting the good times roll as often as possible. Renowned for her generosity, Dixie shared her gifts of friendship, hospitality, and optimism with friends, relatives, and innumerable pets. She is survived by Leroy Brown, her cat.
Dixie was born on her parents’ kitchen table in Waterville, Washington on September 6, 1922. The daughter of the late Peggy and Ralph Thompson, she attended schools there and in Kent where she formed lifelong friendships. A talent for writing led her to Eastern Washington University, where Dixie began her broadcasting career on the college radio station. After college, Dixie’s adventures included producing USO shows throughout Europe soon after World War II. In 1951, Dixie wrote the lyrics for the “Black Ball Ferry Line,” sung by Bing Crosby, the Andrews Sisters, and others. Later she wrote and produced livetelevisioncommercialsfor“DoubleorNothing”andothergameshows. Shewentonto produce award-winning radio and television commercials, including Kawasaki Motorcycles’ “Let the good times roll” campaign. During her forty-year broadcasting career, Dixie worked at advertising agencies in Los Angeles, New York, and Chicago. Upon retirement in 1990, she returned to her beloved Washington state where she lived overlooking Puget Sound until her death.
Cremation has taken place. No services are planned. Everyone who remembers Dixie is asked to celebrate her life in their own way. Raise a glass in her honor and commemorate a life well lived. In her memory, Dixie would hope that you would do an unexpected and unsolicited act of kindness to someone—or some animal-—less fortunate. In Dixie’s view, that would be almost anyone. She was, she often said, “the luckiest person in the world.” (The Cat’s Meow and the Anacortes Animal Relief Fund were among Dixie’s favorite organizations.)
Special thanks to beloved friends and caregivers Karen Stump, Cathy Layman, and Tami Bridge for their loving and tender care during the last years of Dixie’s life.