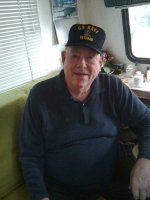 Darriel Louis Gorsegner, born May 5, 1934, passed away at the age of 78 on Sunday April 21, 2013 in Lynden, WA. He was the third of four children born to Emil and Iola (Blowers) Gorsegner. Darriel spent his formative years living on Lopez Island before moving with his family to Ferndale, WA. After graduating from Ferndale High School he joined the US Navy and served on the USS Mt. Baker during the Korean War. From there he came home and worked in the potato fields before taking over his fathers dairy farm in Ferndale, WA. During retirement he enjoyed gardening, a good game of cards, the occasional day trip around Whatcom County, sharing stories of the fields he harvested and people he worked for, and trips to Missouri to visit his daughter Wendy and her family.
Darriel is preceded in death by his daughter Torrie Gorsegner, his brother Darrien Gorsegner, and both of his parents. He is survived by his children Scott Gorsegner of Ferndale, WA, Wendy (Ron) Helms of Bonne Terre, MO, Shawn (Lucia) Gorsegner of Ferndale, WA and Traci Snyder of Bellingham, WA, his sister Elaine Pekema (Murray Fuller) of Bellingham, WA, brother Dale (Elaine) Gorsegner of Lynden, WA, 8 grandchildren, 1 great granddaughter, and several nieces and nephews.