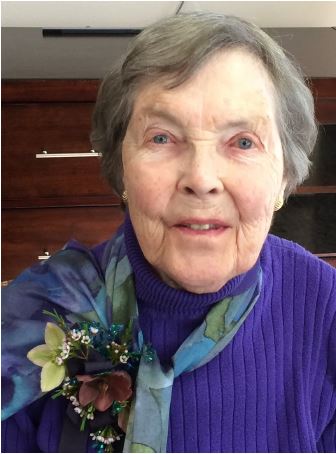 Cynthia Harvey Smith was born March 23, 1928 to Donald Smith and Florence Williams
Smith. Raised in Scarsdale, New York and Wellesley, Massachusetts, Cynthia was a New
Englander to the core. She and her two younger sisters spent many summers at the family’s
“camp” on the shores of Harvey’s Lake, in the shadow of Harvey’s Mountain, West Barnet,
Vermont. This region in the northeast corner of Vermont, along the Connecticut River, was
settled in the late 1700’s by Colonel Alexander Harvey, our Scottish ancestor.
As a girl, Cynthia loved nature, being outdoors, viewing birds and serving as a summer camp
counselor. She was quiet and highly intelligent. Graduating from Abbot Academy in Andover,
MA., she majored in Zoology at Wellesley College. Next she travelled by train to California to
become a certified Physical Therapist at Stanford University. Afterwards she returned to work at
Boston Children’s Hospital with patients afflicted by polio and other ailments.
Following her courtship and marriage to John A. McFalls — a Naval Officer from Cleveland,
Ohio and graduate of Dartmouth College, New Hampshire, they were stationed on Guam during
the Korean War. While John served as a naval communication officer, Cynthia served as a
physical therapist for the governor’s daughter (with Cerebral Palsy) as well as working in a local
hospital.
Upon returning to the continental USA, the young couple and their newborn daughter settled in
Seattle where John earned his Masters in Business at the University of Washington. There
Cynthia focused her care and compassion on raising their five children (5 D’s – Donna
[Holmes], Dean, Debbi [Barth], Diane [Anders] and Douglas). Beyond maintaining the home
and carpooling children to countless activities, Cynthia also supported Dad’s career, chaired the
PTA, volunteered in the school library, led Girl Scout troops, attended our activities, served the
church in numerous ways, and played tennis into her 70’s.
As their older children began leaving the nest, Cynthia and John began welcoming international
exchange students. During and after the Vietnam conflict, Cynthia dedicated much of her time
and energy to meet the needs of refugees from Southeast Asia – Vietnam, Laos, and Cambodia.
She also worked as a private caregiver for elderly men and women.
In her golden years, Cynthia travelled extensively with church groups, Elder Hostel (Road
Scholar), family members, or on her own. She visited Russia, China, India, Nepal, Bangladesh,
Thailand, Europe, Egypt, Jordan, Israel, Tanzania, Kenya, South Africa, Mexico and crossed
Canada by train. For many years she summered at the family camp on Harvey’s Lake, VT with
her sisters, other family members and friends.
Cynthia’s heroine was Mother Teresa whom she met in Calcutta in the early ‘90’s and again in
San Francisco when her son, Dean, was ordained as a priest. Mother Teresa held her hands and
said, “Thank you for giving your son to Jesus.”
During this past decade, Cynthia resided in Bellingham, WA and lived her final 1-1/2 years
at Bellingham’s Silverado Memory Care Community. A celebration of life for Cynthia
Harvey Smith McFalls will be held privately by her children and their families in late spring
at the Harvey’s Lake camp in Vermont.
“Please bear in mind that I have had a good life – am blessed with a wonderful family.
Therefore, no need for sadness. Have a good time if you have a family reunion; celebrate!” –
Written by Cynthia in 1995 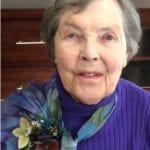 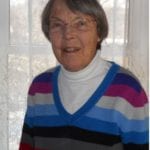 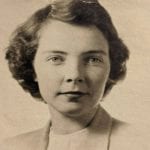