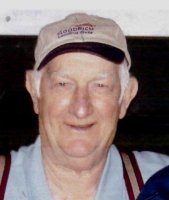 Clifford (Cliff) Eugene Thistle was born on April 18, 1922 and raised in Whatcom County. He was the youngest of two brothers, and prior to his brother Less death, he spent time each day with him as they were not only brothers, but best friends.

In his early years, he spent time bird hunting, fishing with his dad, brother, and son, and even took a course on taxidermy and became proficient in preserving the birds that he hunted. He was an artist, although he would never admit that, and excelled in drawing cartoon characters and making pieces of wood come to life. Woodworking became his passion in later years.

He was a hard worker, sometimes working two jobs so his family could go on wonderful camping vacations each year, and Jeff and Lori hold those memories close to their hearts. He was a meat cutter for over 40 years and would talk of carrying 250 lb sides of beef off the truck, long before they invented the pulley systems and boxed delivered meats.

Wild Fern Park became his and Veras legacy to the family they love so much. The post and beam building and log cabin, baseball field, and play areas all put into place their vision of a lifetime of family picnics and outdoor fun. Dad will be sadly missed by us all.

There will be a funeral service and reception on Saturday November 9th at 1:00 PM inside the chapel at Moles Farewell Tributes-Greenacres Memorial Park, 5700 Northwest Drive, Ferndale. Donations Information

Donations in Cliffs name may be made to the Whatcom Hospice House.