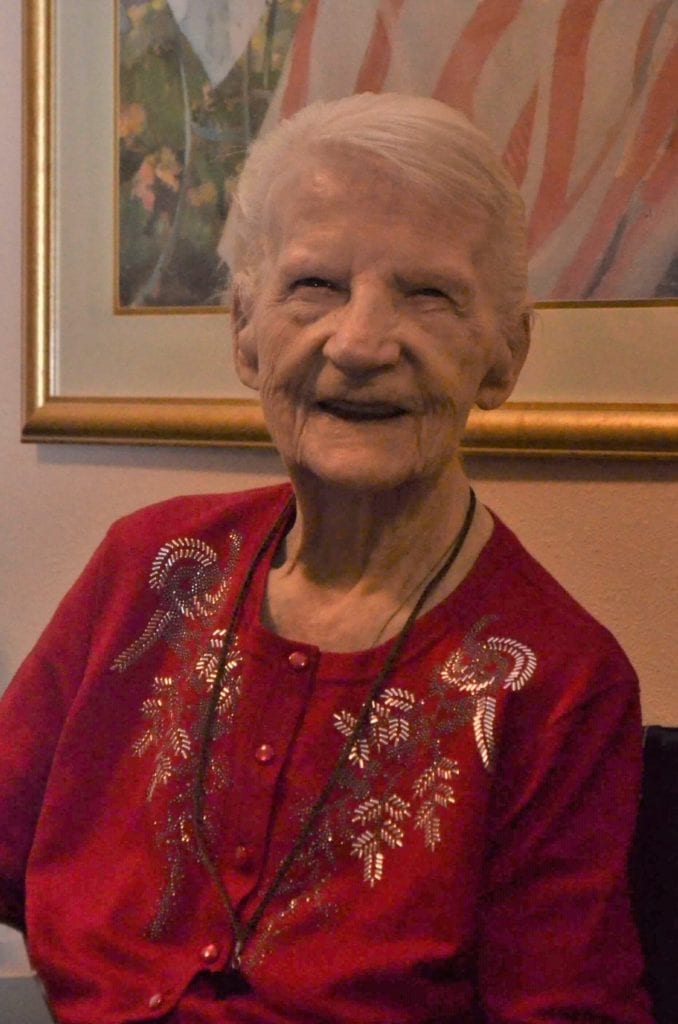 Carol F. Larsen died peacefully at the age of 103 in Lynden, WA on January 13, 2021. She is home in Heaven joining numerous family and friends who preceded her. Graveside services will be limited to family members due to the current Covid restrictions.
Carol was born Florence Carol Dando in Williamstown, Pennsylvania on November 22, 1917. Her life was bookended by two global pandemics: the Influenza Pandemic of 1918 and the current Coronavirus Pandemic. Neither one would touch her. She lived a full and interesting life that spanned the east to west coast of the USA, not to mention a circumnavigation of the world later in life.
Carol grew up in a coal mining family. Her father wisely moved his family from the mining hills of the Poconos to the big city life of Philadelphia in order to steer her brothers away from mining. Most of her youth was spent in the Philadelphia area. She recalled patching shoes with cardboard and scraping butter wrappers during the Great Depression. As a young adult, she lived as a nanny in Georgia and, when WWII began, found work at the large aviation factories in the south as a clerical worker. Only a few years ago did her children discover her honorable discharge from the Navy, having enlisted and been commissioned to attend officer training in New York! But the war ended two weeks later and she was relieved of duty. She never told anyone!
After the war, a close friend encouraged her to visit Bellingham, WA. The friend’s motive was to introduce her to John Larsen, a bachelor bricklayer living in Bellingham. He too had worked his way into the area from the Midwest, where he had started as a Danish immigrant. She returned home to pack her things into her Plymouth coupe and drive, along with her parents Charles and Mary Dando, across the states to make her new forever home. She left her PA family that, at one time, counted four sisters and seven brothers, mother and father, for this new adventure 3000 miles away!
Marriage ensued and a new (brick) house on Yew Street in Bellingham still stands where they began raising a family. After five years, they moved to their permanent home at Wiser Lake on the Old Guide. It was an old fashioned farming area where neighbors and church (First Baptist in Lynden) quickly became their family. When her husband John retired in 1970, Carol returned to the workforce after a 20 year hiatus as a wife and mother. She fit right into a growing WWU, first as a secretary at the Physical Plant and ending at the English Department in 1979.
She travelled many times to her husband’s homeland of Denmark, making cross country car trips to visit her family in PA on the way. Following her husband’s death in 1981, Carol began travelling in earnest. There were the typical Hawaii vacations, and trips with travelling companion Mavis Taylor (retired Lynden school teacher), but she was a fearless traveler, setting off alone for SE Asia, Nepal, India, and ended up circumnavigating the world. While some typical tourist buses were included, she took advantage of local transportation in many cases. She was a true adventurer. She had fun!
She finally pulled back when well into her 80s and was happy to enjoy her growing family of grandchildren. The grandchildren can attest to the fun they had on some Grandma adventures! In 2006, she was suddenly hospitalized with a serious ailment and never returned to her Wiser Lake home. She battled on! Living contentedly at both Lynden Manor and Christian Healthcare Center in her last years, her avid reading continued to fill the void that physical travel could no longer. She remained as sharp as ever and able to recount the stories of her very eventful life.
We love you and will miss you mom, grandma, great-grandma! She is survived by her children, Greta Haynes (Dan deceased) of Bullhead City, AZ, Joe and Anne Larsen of Bellingham and Coupeville, WA, and John and Jacquee Larsen of Lynden, WA; grandchildren, Amber Larsen (Eric Dudley), Carrie Oates (Dan), Ryan Stamm, Katrina Groen (Chris), Anna Larsen, and Peter Larsen (Lauren); and great-grandchildren, Abigail, Luke, Charlotte, Joseph, Jeremiah, and Joelle.
She was predeceased by her husband, John Larsen, and granddaughter, Marta Veldman with great-grandson, Mason (Jeff).
Memorial donations may be made in Carol’s name to: Lynden Community Church (680 Grover Street, Lynden 98264).