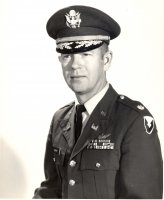 Buddy Jack Choat, former resident of Bellingham, WA, died Saturday, February 16, 2013 in the Villages, FL. Jack was born in Dallas, TX on March 6, 1931 to Oscar and Henrietta (Johnson) Choat. He obtained bachelor degrees from both the University of Texas at Austin and the Missouri School of Mines at Rolla, and went on to obtain his masters degree from George Washington University. Jack served his country for 26 years in the United States Army. He was a graduate of the US Naval Test Pilot School, served two tours of duty in Vietnam as a helicopter gun ship pilot, was decorated numerous times for his service including the militarys Bronze Star, The Air Metal, The Distinguished Flying Cross and The Purple Heart, and retired with the rank of Lieutenant Colonel. After retiring from the US military, Jack worked for many years with the City of Bellinghams Public works department as a civil engineer.

Jack was an active member of the Bellingham Power Squadron, Bellingham Yacht Club, Society for Experimental Test Pilots and the Whatcom County Organ Society. He served many years on the board for North Coast Credit Union and made numerous trips to Japan as part of the Bellingham Sister City Program. He enjoyed dancing, boating, traveling, socializing and playing the guitar and organ.

Jack was preceded in death by his wives Glenda (Purcell) Choat and Jo Ann (Cross) Choat.

A memorial gathering will be held on Saturday April 13, 2013 at the Roeder Home in Bellingham from 1-4 PM. Moles Farewell Tributes-Bellingham

A memorial gathering will be held on Saturday April 13, 2013 at the Roeder Home in Bellingham from 1-4 PM.