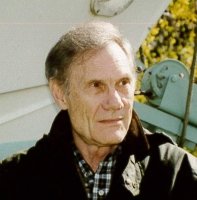 Born on New Year’s Eve, 1925, Bickford (Bick) Sylvester spent his first years in Washington, D.C. with his parents, Louise Bickford and John Albert Sylvester. In 1929, Bick and his younger brother, John Albert Sylvester, Jr., moved to Rockland, ME, to be raised by their grandparents, Dr. and Mrs. Ralph Bickford. There, Bick learned to ski, worked in the family garden, built his own rowboat, played his trumpet, and developed a lifelong interest in jazz.

After high school graduation in 1944, Bick joined the Army and was sent to Italy, where his unit supported the 10th Mountain Division at Mt. Belvedere. When war in Europe ended, he was transferred to an Army Band stationed in Florence, Italy. Like many fellow veterans, Bick came home and took advantage of the GI Bill to get a college education, attending Bates College in Maine and the University of Connecticut where he received his B.A. and M.A. He taught briefly at Kent State University in Ohio, then married Barbara J. Brown and moved west to obtain a Ph.D. at the University of Washington, chosen for its excellent English department and its proximity to Northwest skiing. Family and friends feared the move, exclaiming that folks went out west and never returned. Bick proved the fear to be well-founded.

In 1966, he accepted a position at the University of British Columbia. The next year his only son, John was born. Bick would share with John a lifelong passion for teaching, soccer, and salmon fishing. For Bick, fishing was both therapeutic and spiritual; he believed time spent fishing would be added back on to the end of his life. After many years of fishing and guiding, he became, like Paul in A River Runs Through It, an artist. Fittingly, his scholarship had focused on the works of Ernest Hemingway, particularly The Old Man and the Sea. He became an acknowledged authority on Hemingway, serving on the board of directors for the Hemingway Society and on the editorial board of The Hemingway Review. After retirement, he continued to teach occasionally at Western Washington University, and as a Distinguished Visiting Professor at the U.S. Air Force Academy, also organized a conference on “Hemingway and War.” In collaboration with the Director of the Hemingway museum in Cuba, he organized, as well, international conferences in Havana, thus pioneering the study of Cuban influence reflected in the books written by Hemingway in Cuba.

Bick also coached youth baseball and soccer and mentored countless young people, helping them gain acceptance to colleges and universities. He had a profound ability to recognize excellence in others and to help them to see it themselves. He will be greatly missed.

Preceding Bick in death were his parents, his brother, and his step-father, Arnold Runge. He is survived by his wife of 54 years, Barbara, his son, John Bickford Sylvester (fiancee, Francine Kirton), and extended family across the country. The family is especially grateful to Circle of Life caregivers whose excellent care brightened Bick’s final months.

A memorial service and reception will be held at Moles Greenacres in Ferndale on Sept. 5, 2:30 p.m. Donations Information

In lieu of flowers, please consider a donation to the Alzheimer’s Society, St. Brendan’s Anglican Church, or a charity of your choice.