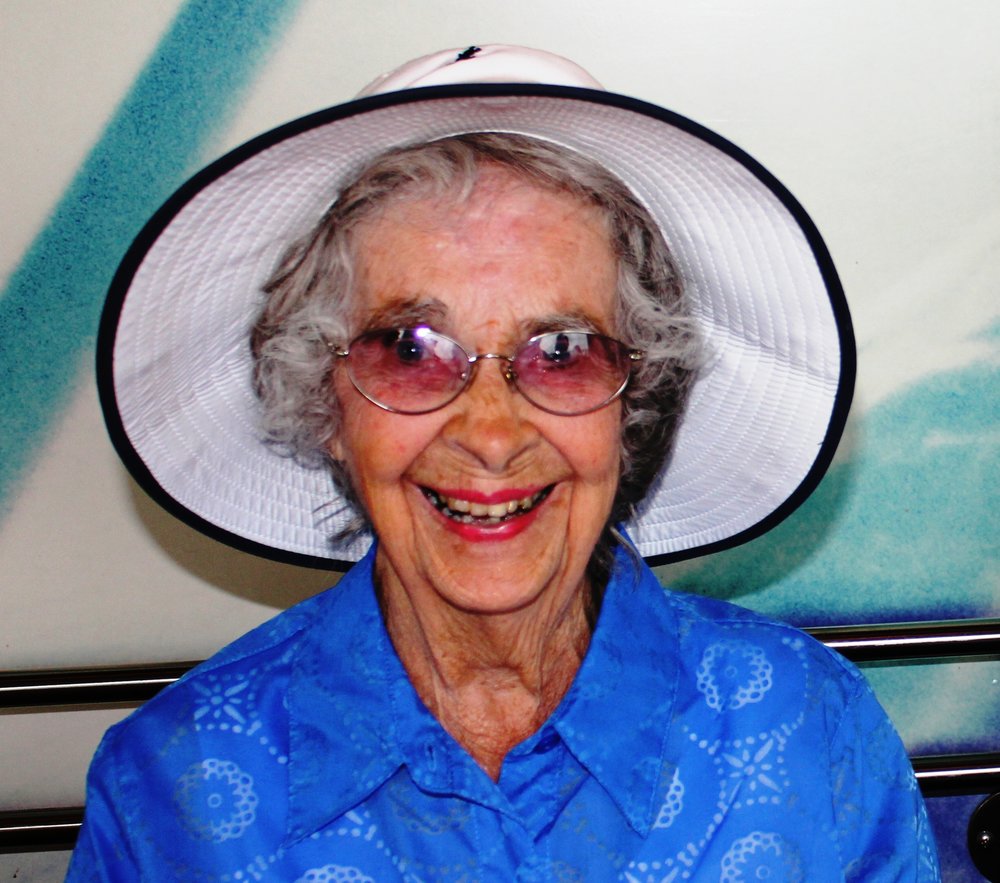 In high school Betty won ribbons in rolling skating at the old armory in Bellingham, where she spent much of her free time. She loved school and excelled in radio broadcasting. She was a cheerleader and enjoyed dancing during the lunch hour and at other school dances throughout the year.

She met Martin at an early age, when his family moved into the same neighborhood. They always felt they had known each other all their lives. They ended up sweethearts, and married in Bellingham on July 24, 1948 at the home of Martin’s parents on Broadway.

They had a wonderful life together, starting out in a two car garage on four acres of land, in north Bellingham. Until the end, in all their years of marriage, they spent only four nights apart. While raising four children she worked for the Bellingham Schools in the kitchen and at the Bonanza 88 Stores for over twenty years in Bellingham and Sedro Woolley. From 1968 to the late 70’s Betty and Martin owned and operated an eatery, The Cone, on Cornwall Avenue. Betty managed and worked in it by day, and Martin came at night to make the ice cream, and peel and slice the french fries for the following day.

In their life together, Mom and Dad had the opportunity to go to Japan twice, when Dad was hired to create some carvings. She loved to travel. They went to Hawaii, took their whole family to Harrison Hot Springs for their 50th anniversary; took them to Disneyland on their 55th anniversary, on the Alaska Cruise for their 60th and to the Great Wolf Lodge for their 65th. What family fun we had the privilege to share together. On other trips across country to Newport Rhode Island, to Key West, Florida, to Washington DC, to Colorado, to Virginia, to California and many other states throughout our United States. A cruise through the Panama Canal, and a wonderful trip to Greece, England, Turkey and Egypt. They loved those experiences!

Mom loved her family, and did everything possible to create in each of them the love and importance of family. She created family gatherings to bring everyone together throughout the year. More recent memories began with the first Christmas in the log house that Martin built at the forty acres south of Lake Samish in 1986. She made thirty-some Christmas stockings with everyone’s name on them, and hung them around the fireplace mantel, and there was a decorated Christmas tree in every room.

What our family will always remember about her is her love of entertaining, her beautiful fun-filled sense of humor, her love of gardening, canning, baking, and hiking. She was den leader of Ricki’s boy scouts, the co-leader of Marta’s bluebirds, and PTA President at Birchwood School, to name a few places of her community involvement. She was her kids’ taxi driver, taking them to music lessons, sports events, and cheering them on in all things, and helped Kristi to get to Candy Striping at the hospital.

With the Grandkids, she did much the same. She loved taking them to Birch Bay to play in the sand and comb the beach, had them painting pottery each summer, would help them pack a lunch and go to Bloedell Donovan to spend the day. And, a special outing would be taking all the kids to the zoos at Seattle or Stanley Park in Vancouver, teaching them to love and respect all animals.

Always, always, there was singing around the piano as the four kids grew up. And, when Bobby joined the family, we continued on through the years until as recently as the day we celebrated their 69th anniversary at the Mt Baker Care Center.

All of us shall miss you. Until we meet again, know that we all hold you in our hearts and love you very much. We were blessed to have you as wife, mother, grandmother, great-grandma, sister, sister-in-law, aunt, mother-in-law, and friend for as long as we did. Love and hugs.

A Memorial Service will be held at the Garden Street United Methodist Church Bellingham, WA at 1pm on Thursday August 17, 2017, with reception following.