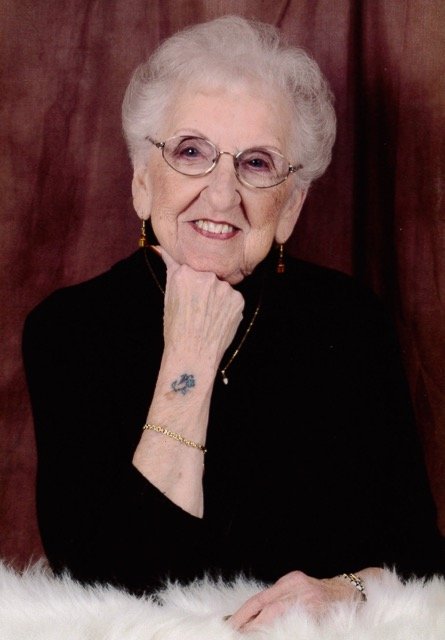 Toots Swinburnson, long time Lynden resident, passed away peacefully on July 10th at the age of 93. Born Bertha Marie Kehl in Boyd (Carbon County) Montana on Nov 6, 1921 she was mercifully nicknamed ‘Toots’ as an infant by the minister at her baptism. It stuck. Her parents, Gabriel and Anna Kehl, already had five of their nine children when they emigrated from the German settled Black Sea area of Russia in 1909. The rest, with Toots being the last and largest at 13 pounds, were born on the trek west from Ellis Island as the family ‘worked’ its way across the country.
Toots married Walter Swinburnson in 1944. They settled in Lynden and spent the next nearly 50 years there together. They were charter members of Hope Lutheran Church. Trained in beauty school in San Francisco during the early part of World War II, Toots worked as a beauty operator locally for 20 years. That gave way to a career as office manager at JC Penney Co. in Lynden until retirement after another 20 plus years. In later years, she was a multiple gallon blood donor, volunteered as a member of the mobile mammogram team in Whatcom County, and worked a ticket gate at the Northwest Washington Fair every year until she was almost 90 years old. She loved spending time with family and friends, playing cards, and was an avid (and perennially disappointed) Mariners fan. She was sweet and caring but could literally and figuratively pack a wallop – a great and loyal friend but a very formidable adversary.
Toots is survived by her two sons, Kurt (Andrea) of Kauai, Hawaii and Cory (Julia) of Blaine. She has 8 grandchildren (Mike, Dina, Gabe, Ryan, Tyler, Nolana, Brianna, and Rachel), seven great grandchildren (Ariel, Ella, Cooper, Grady, Jesse, Bella, and Maverick) and one great great grandchild (Penelope). Her husband, Walt, preceded her in death (1993), as did all of her siblings. She was a loving aunt to many nieces and nephews, some who preceded her and others who will grieve her departure. Also missing her will be many friends in and around the Lynden area.
Until age 91 she lived alone but her last 18 months were spent at Good Samaritan – Stafholt in Blaine. She loved the staff and residents there. The superlative loving care she received at Stafholt cannot be overstated.
A Celebration of Life will be held on Sat. July 25, at 2:00pm at Moles Farewell Tributes – Greenacres, 5700 Northwest Dr, Ferndale. She will be laid to rest next to Walt in a private burial at Greenacres Memorial Park.
Please share your memories of Toots at www.molesfarewelltributes.com