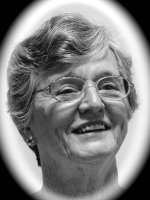 Barbara was born in Winnipeg, Manitoba, Canada. She died at the Hospice House in Bellingham as a result of Alzheimer’s Disease. She had recently been transferred from Highgate in Bellingham. She leaves her husband, Kelvin C. Smith; sons Bradley C. Smith and Gregory L. Smith; sister Betty (Allan) Allen of Caldwell, ID; and brother Donald A. Allan of Lancaster, PA. She also leaves her sister-in-law, Peggy Allan, plus nephews James Allan, David Hall, Tim Hall, Chris Allen, and Jeff Allen. Barbara’s parents were Anna Ruth (Sinclair) and Archibald (Archie) Alexander Allan. Archie was an ordained pastor in the Christian Church (Disciples of Christ). Archie and Ruth served churches in Millersburg, KY; Williamsville, NY; St. Thomas, Ontario Canada; Jamaica; Memphis, TN; and Vacaville, CA. So, Barbara lived many places. In her teenage years that included Jamaica. Professionally, Barbara was a registered nurse with a specialty in Psychiatric Nursing. She received her Bachelor’s Degree from the University of Tennessee (Memphis) in 1955. She taught OBGYN nurses at Methodist Episcopal Hospital in Philadelphia before moving into psych nursing in California. She worked at Merritt Hospital in Oakland and California State hospitals in Napa, Norwalk, and West Los Angeles (UCLA NPI). After bringing up two children, she worked at a psych ward in Wichita, KS and later in a nursing home in Redmond, WA. Barbara and Kelvin have been active members of churches throughout their lives. At the First Christian Church (Disciples of Christ) in Bellingham, Barbara served as an elder. She also helped at the Interfaith Cold Weather Shelter. She helped with developmentally challenged adults at Marianne’s House when it was first located at her church. She had also served with challenged adults at the Bellevue Christian Church. She served with a shelter program in Bellevue called Congregations for the Homeless. She participated on Capital Hill during a period when First Christian Church in Seattle was becoming “open and affirming” and then merged with Pilgrim Congregational Church to become All Pilgrims Christian Church. Barbara was also a board member of the Church Council of Greater Seattle. Barbara and Kelvin met in Southern California and were married on July 1, 1967 in Latrobe, PA. They lived in Sepulveda, CA; West Bloomfield, MI; Wichita, KS; and Redmond, WA. They have lived in Bellingham, WA for almost 12 years.

A memorial service will be held April 11th, 2:00pm at the First Christian Church, 495 E Bakerview Rd, Bellingham, WA 98226 . A reception will be held following the service.