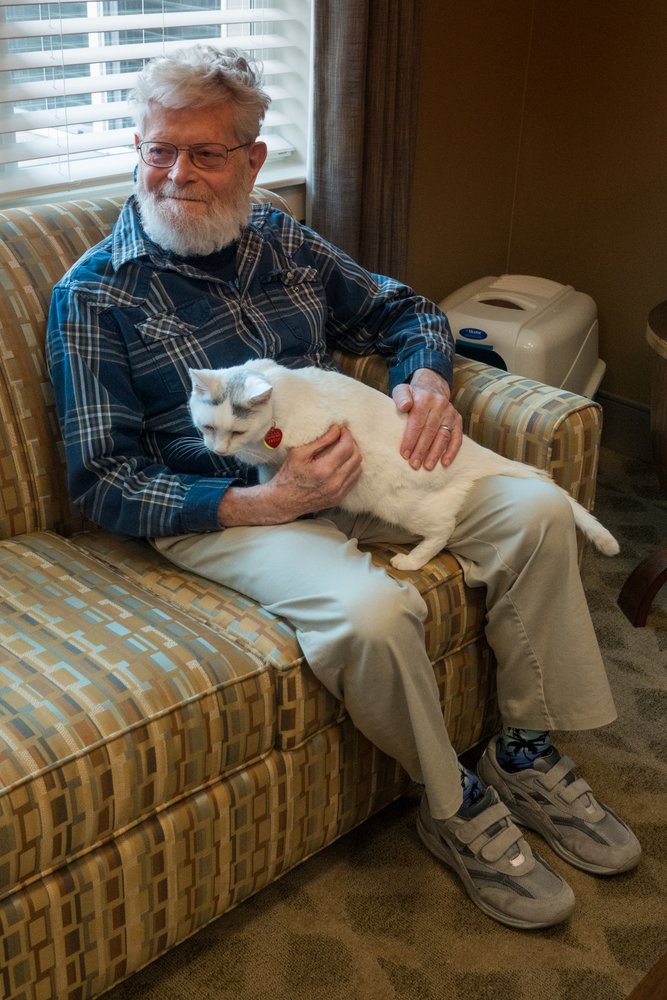 Arvin Chaikin passed away around 2:30 pm on Sunday, May 14. It was a blessing for him to leave a life of loss due to Alzheimer’s. He chose to move on to whatever follows this life rather that stay here without being able to do what he loved, communicate, or share his thoughts with his family. This is a blessing and we wish him well on the next phase of his existence.

Arvin was Born December 31, 1928 in Brooklyn, NY to David and Hannah Gelerenter Chaikin. He lived in an apartment in the building where his father practiced dentistry. He and his mother went every summer to stay on a farm in the Mid-Hudson Valley. His father joined them on the weekends. Arvin fell in love with the country and spent hours exploring the area and helping the farmer bring in the hay. When he was ten years old he and his mother spent a year traveling west because of his mother’s health. They returned to New York and Arvin lived there until he was a young man. He studied piano and took classes at the Manhattan School of Music. It was there he heard his first classical guitar concert. He was hooked and learned to play guitar as soon as he could. He had a lifelong love of classical music.

Arvin graduated from Tilden High School in Brooklyn. He took classes in photography and tried his hand at baby photography before getting a job at Macy’s as their camera sales and repairman. When Arvin was 18 he met Evelyn Rabinovic whom he married when he was 21. They moved from Brooklyn to Kerhonksin in the mid-Hudson Valley. First Lynda was born and five years later Helena. Arvin got a job as a tool and die maker at Channel Master as an apprentice. He worked his way up to master toolmaker. He was known for the ability to work to the highest tolerances and got the most challenging assignments because of his skill. From Channel Master he moved on to IBM where he did the same kind of work. When they asked him to be manager he chose to become an engineer and took over running the glass test lab for gas panel displays in Kingston, NY.

Arvin loved living in the country. He became close friends with Seymour Sussman who had a country gun store. He and Seymour explored the country and hunted together. Arvin and Evelyn lived in an apartment behind Seymour’s store until they found a home to buy.

When Arvin was in his late 30s he had a severe eye accident that changed his life. Luckily his eye was saved. Arvin’s outlook had changed and he began to rethink his life. The result was an end to his marriage and several years of therapy that let him know himself and to grow in strength and self-assurance.

When Arvin was 46 he met Ann Nunes in a therapy group. It was the kind of therapy where deep issues are explored and a hug from a friend after an intense session is welcome. When Arvin hugged Ann she knew she was home. Arvin knew it too. They moved together in 1978 and were married in 1990 when Ann became Ann Chaikin. The two were soul mates and best friends for over forty years.

Together Ann and Arvin lived with Ann’s son Jason who was six when they met. Arvin’s daughters Lynda and Helena also visited frequently. And Ann and Arvin took many family trips to California to visit Ann’s parents Ed and Elsie McMillan, brothers Dave and Steve McMillan, and their families. Both Ann and Arvin worked at IBM. While they both worked they shared home duties. They lived in a pink house on four acres on a country road in Rosendale, NY. Jason’s dad lived close by and both families traveled together to Jamaica when Jason was ten. Arvin spent many happy hours folk dancing. His daughter Helena danced with him and so did Ann. They joined two groups, one in Woodstock and one in High Falls. Ann and Arvin also went boating and waterskiing on the Hudson with friends. Ann sang and Arvin played piano and guitar. They hiked at Mohonk and traveled. Both were avid photographers.

Arvin loved cats. Before he knew Ann his favorite cat was Smokey. That cat would sit on Arvin’s lap and wait for him to finish his desert and let the cat have his turn licking the bowl. Ann and Arvin had many cats over the years: Archie, Ann’s cat when they met; Traveler, Pogo, Rosie, Fiona Queen of the Universe, and our current cats Duma and Mehitabel.

In 1982 Arvin and Ann moved to California to be near Ann’s parents. They both worked for IBM until Arvin retired in 1990. Arvin never bonded with California and was ready to explore a new place when he retired. So, Ann and Arvin got married and moved to Bellingham, WA. When they arrived the end of April, they both felt that this was home for them. They fit right in and loved everything about the place. Arvin even loved the gray weather, Ann not so much.

When Arvin arrived in Bellingham he began a search for a volunteer position helping people with Cerebral Palsy. He helped a wonderful young man named Mark, setting up a connection between Mark’s wheelchair communication device and a personal computer. Later Arvin joined Goodwill as a computer literacy trainer. He volunteered twelve years and was the first ever Seattle Goodwill volunteer of the year. Arvin loved helping people. Even after he developed Alzheimer’s he helped others when he spent time at Adult Day Health, first in Bellingham and then in Lynden. He also joined the Staying Connected groups at the Alzheimer’s Society of Washington, a local support group for sufferers of dementia and their caregivers.

As Arvin’s condition worsened, it became clear that Ann could no longer fully care for him at home. So, on January 5, 2017 he moved to the Silverado memory care community. He lived there until his death. He received wonderful loving care there.

Arvin was preceded in death by his parents David and Hannah Chaikin. He is survived by his wife Ann, daughters Lynda and Helena, Ann’s son Jason Nunes, Ann’s brothers Dave (Nora) McMillan and Steve McMillan, and nephews Emmett (Jennifer) McMillan and Spencer (Anjelica) McMillan, and Emmett and Jennifer’s children Bailey and Madden McMillan. Arvin is also survived by close friends too numerous to name one by one. You know who you are. He loved every one of you.

The family would like to thank The Alzheimer’s Society of Washington, Adult Day Health, and Silverado for all of the wonderful care they gave Arvin in his last years. Without these groups life would have been so much harder for all of the family and for Arvin. We are also thankful for Bellingham Hospice who helped Arvin in his final days.

There will be a celebration of Arvin’s life at Moles Farewell Tributes – Bellingham on June 25, 2017. 4:00 – 7:00pm. We welcome all Arvin’s many friends and acquaintances to this celebration. Bring your stories of Arvin and share them if you wish. Let’s have a great party in his honor.

If you wish, please make donations to the Alzheimer’s Society of Washington. They are a small local organization and they do so much for the families and the people who have many forms of dementia, including those with Alzheimer’s.