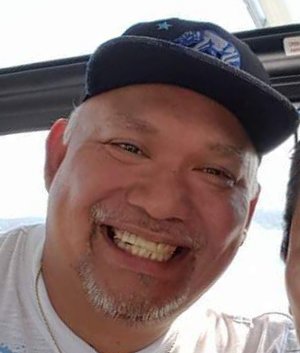 Anthony “Tony” Haynes Julius, age 49, of LaConner, WA, and the Lummi Nation, passed away on September 20, 2017. Tony married Marcia Dee Williams on June 19, 2008 in Bellingham, WA. Tony and Marcia lived a very adventures life together. He lived life to the fullest everyday. One of the things he liked to do was going to concerts. He could tell you exactly how many they had been to in the past 5 years or so and tha number was close to 100. He loved traveling with Marcia, music, movies, golf, fishing, and cooking for everyone. Most of all he loved spending time with his family and close friends. Tony was a great family man who would have done anything for his wife, kids and family. He was a loving, happy, funny, caring, generous, kind, brave and adventurous man who will be missed. He is survived by wife, Marcia, daughters, Daniell (Nathan Walsh), Tawny (Sarah Crediford), Kacia (Levi Lott), Kiarra, and Laylianna; sons, Kason, Sheldon Williams, Steve Rosser-Cultee (Xuexia),; granddaughter Emily Walsh; grandsons, Desmond Walsh and Patrick Rosser-Cultee; mother Anita Johnson; sisters Tamara Julius and Natalie (Maureen) Williams; nephews Joey Julius, Bradley Loyd, Brandon Thompson, Darian Wiiliams and Nathanial Williams; nieces Kalia Peters and Isabelle O’ Leary; and Goddaughters Mary Delgado and Silsalia McCraigie-Jack, Preceded in death by grandparents Haynes and Vela Julius; uncles, Michael, Creig, Haynes and John Julius; aunts, Vera Solomon and Jena Ostrand and nephew Davonte Thompson. A prayer service will be held on Sunday, September 24 at 6pm, and a Funeral Mass on Monday, September 25 at 10am. Both services will be held at the Wexliem Community Building.