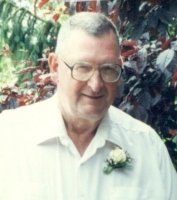 Alvin Leroy Sherman was born on April 12, 1932 in Oak Harbor, Washington to Earl and Harriet Moran Sherman. Alvin passed away peacefully at home on July 24, 2012.
While growing up Alvins family lived in Oak Harbor, western Montana and Marysville, Washington. He graduated from Marysville High School in 1950, from Everett Community College and Western Washington College. Alvin served proudly in the US Air Force and US Air Force Reserves for 25 years. Alvin worked for the U.S. Customs Service as an Import Specialist in Portland, Seattle and Blaine before retiring in 1987. He spent another 5 years working for Jack R Hulls before really retiring.
Alvin married Kathryn Roberta Jennings on June 20, 1959 at the Marysville United Methodist Church. They lived in Bellingham while he finished school. They raised three children in Portland Oregon, Edmonds, Lynnwood, Lynden and Blaine. In Blaine Alvin and Roberta built their dream home with a fruit and nut orchard and a garden that lovingly fed the family year after year.
Playing and watching sports was Alvins passion. Football, basketball and baseball were Alvins go-to games in high school and college. Mens league basketball and mixed league bowling were Alvins hobbies for many years. Swinging golf club daily was his life-long goal.
Alvin gave back to the community in many ways, coaching little league teams and supporting all boys and girls school athletic programs. Alvin could be found cheering for all Whatcom County Schools at state championship games in Yakima, Tacoma and Wenatchee state tournaments until just two years ago.
Alvin was a member of the American Legion in Blaine and the Republican Party. He was a founding member of Blaine Athletic Association, which raised money to help support Blaine school athletic programs; serving as President, Vice President and Treasurer multiple times. He also held many offices with the Grandview Golf Course mens club, where he golfed at least once weekly for over 30 years.
Alvin is preceded in death by his wife of 52 years Kathryn (Roberta) Jennings Sherman, May 4 2012, her parents Ellsworth and Kathryn and her brother Ralph Jennings. Alvins brothers Harold and Henry Sherman, sister in law Bernice Sherman also preceded him in death.
Surviving Alvin are his daughter Marlene (Ross) Oliver, their children Daniel and Kathryn (Katie) Oliver from Marysville WA; son Bill (Georgia) Sherman and their children Sheila, Vivian, Julia and Grace from Blaine WA; daughter Kathy (Oscar) Garcia from Blaine WA and her children Jared and Steven Elsner from Bellingham WA; uncle Jim Sherman from Kent WA; brother Earl (Susie) Sherman from Mercer Island, WA, sister in law Peggy Sherman from Marysville, WA, sister Harriet Trout from Marysville, WA, brother in law Richard (Anita) Jennings from Bellingham, WA; and numerous nieces, nephews, cousins and dear friends.