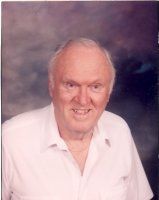 Al was well-known in the community for his generosity. He gave his time, effort, and money to many worthy causes including Whatcom Hospice Foundation, Bellingham Farmers Market, the Whatcom Museum, and St. Joseph Hospital. He was active in the Bellingham Navy League and the Rotary Club, and was a past member of the Bellingham Golf Club and Bellingham Yacht Club. He was a founding member of the San Juanderers Winnebago RV Club and joined them in outings as recently as October.

Born in Los Angeles to Edward Williamson and Mary Crosbie on May 28, 1922, Al was fascinated by math and science from an early age. This led to education at UCLA, M.I.T., Columbia, Harvard and graduation as a chemical engineer at U.S.C. He belonged to Tau Beta Pi and Phi Lambda Upsilon fraternities.

Al served his country in WWII in the Navy on the U.S.S. Rixey as a lieutenant working with radar technology at its inception.

After the war, he began his career with Mobil Oil (formerly General Petroleum), which spanned 35 years, culminating in his position as refinery manager at the Ferndale refinery until his retirement in 1982. He loved his work as a leader, mentor, and inventor. Al also enjoyed contributing to his community, serving on the Governing Board of St. Joseph Hospital for many years as well as the Board of Horizon Bank.

He packed his life with travel, golf, fishing, sailing and camping with his family. His sense of humor and cheerful nature endeared him to everyone who knew him. He will be greatly missed by his family, where there is an Al-shaped hole that can never be filled.

A celebration of his life will be held at Moles Farewell Tributes-Bellingham on Sunday, February 24th at 2:00 pm. Please bring stories to share. In lieu of flowers, please consider donating to Whatcom Hospice Foundation.

A celebration of his life will be held at Moles Farewell Tributes-Bellingham on Sunday, February 24th at 2:00 pm. Please bring stories to share. Donations Information