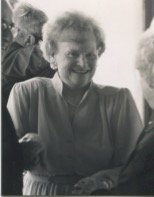 Georgia (Robinson) Drafs was born September 15th, 1919 in Mio, Michigan to Ira Robinson and Elizabeth (Hickey) Robinson. The family came by train to Washington State in 1924 when Georgia was five and settled in Bellingham. Georgia was only 16 years old when she graduated in 1936 from Whatcom High School. She went on to attend Shaw Secretarial School where she became a Clerk Stenographer. Her first job was a secretary in a real estate office and later worked as a secretary in a medical office.
Introduced in 1937 to Jack Drafs by Georgia’s sister Dorothy, their romance blossomed and they married on March 11th, 1939 at St. John’s Lutheran Church. Jack was a carpenter and built their first home. In 1940, their son Alan arrived and Georgia became a stay at home mom. When Alan was just three, Jack went off to fight in WWII and Georgia was left to care for Alan and their home. For 18 months, Georgia went without hearing from Jack while he fought in the South Pacific.
Following the war, Jack worked in Oregon and Georgia and Alan went along. They spent one whole summer living in a log cabin along the Santiam River in Marion Forks. Later, after Alan had left home, Jack took a job in Alaska. While in King Salmon, Georgia taught the local schoolchildren how to crochet and bake bread. Throughout her life, Georgia loved to travel and took numerous trips to Hawaii, Mexico, and Europe, as well as the continental U.S.
She and Jack eventually settled on Cain Lake when Jack lived until his death in March of 2000 after 61 years of marriage. Georgia passed away on Thursday, November 12th, 2015, at 96 years young.
Aside from her family and friends, Georgia’s favorite things were her hanging baskets, her coffee, and chocolate. She had an incredible wit and benefitted greatly from the “medicinal” laughter she shared with all who knew her. Her vocabulary was immense and her heart even bigger. She saw the potential in people and encouraged them to reach that potential. She reminded us all not to “sweat the small stuff” because, in the end, it’s all mostly “small stuff” that causes everyday worries. She was a bright light that will be missed. Special thanks to her caregivers and neighbors for the compassion they showed.
She is survived by her son Alan Drafs and his wife Karen, her grandchildren Kathryn (Scott) Lathrop, Janene (Steve) Gahler, and Scott (Rachel) Drafs, and six great-grandchildren.
A memorial service will be held on Saturday, November 28th, 2015 at 1:00PM at Moles Farewell Tributes in Bellingham (2465 Lakeway Drive). In lieu of flowers, donations may be made to the Lighthouse Mission or Whatcom Hospice.

1 responses to A Georgia Drafs